When adding your accounts in YNAB, it's important that they be set up as the correct account type, because their type will indicate how they behave in your budget.

During account set up, you'll notice that there are two types of accounts in YNAB: Budget Accounts and Tracking Accounts. 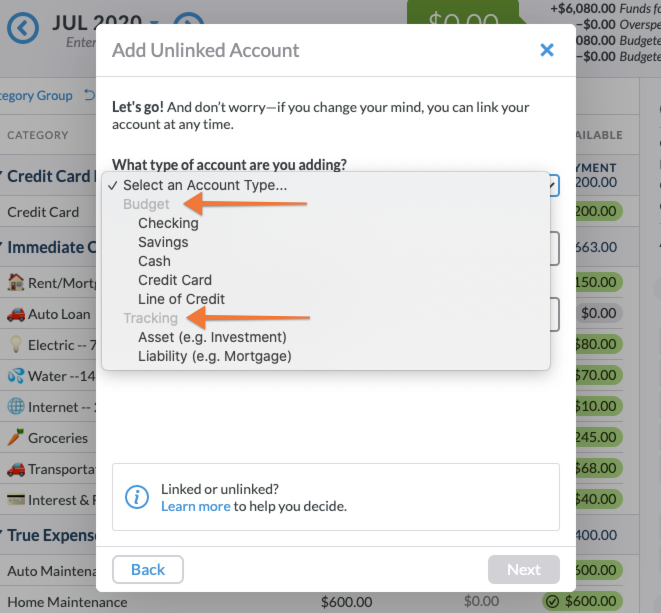 There are five Budget Account options to choose from:

Tough decision? Here's a little secret: Checking, Savings, and Cash all work exactly the same. They are accounts that typically have a positive balance because they're where you store money.

Similarly, there's no difference between Credit Card and Line of Credit. These accounts typically have a negative, or $0.00 balance because funds spent from these accounts become debt.

PayPal accounts are a great example: if you have a PayPal account where you receive, store, and spend funds, choose Checking or Cash. However, if you have a PayPal Credit account, you would choose either Credit Card or Line of Credit. And while we're at it, if you simply use PayPal as a faster way to checkout and send/receive money in your other accounts, you don't even need to add it at all!

The dollars in tracking accounts are not included in your budget. Adding these accounts to your budget allows you to track their balance (we told you we were clever at naming things!) Since the balances in these accounts don't impact your budget, you don't need to add any of them. But you can if you want to—there are two options:

A Budget Account is one that you will spend money from in the near future (usually within the next year or two). Tracking Accounts hold money you don't plan to spend soon, such as investments, or loans you're paying down.

While activity in budget accounts will appear in all three reports — Spending, Income v Expense, and Net Worth — tracking account activity appears only in the Net Worth report.

Here's how you can tell those apart in the budget: 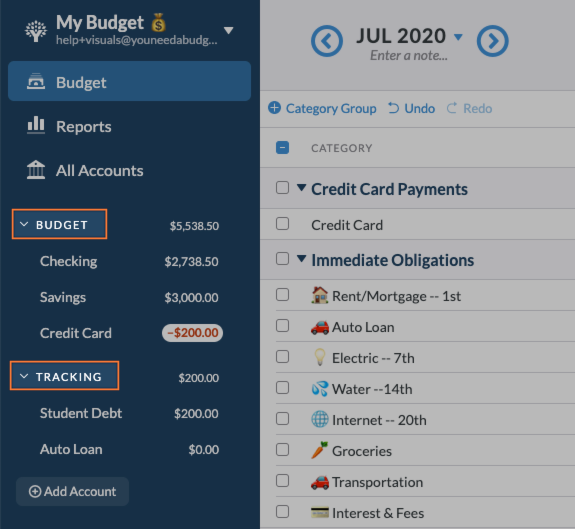 If you're moving funds between accounts, check out this article on transferring money next.

Did this answer your question? Thanks for the feedback There was a problem submitting your feedback. Please try again later.